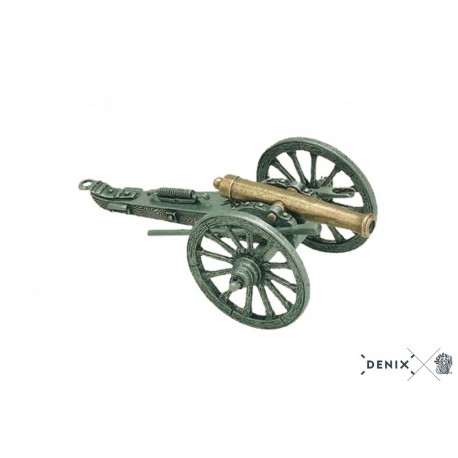 Cannon reproduction made in metal.

The 1857 model, weighted 12 pounds, nicknamed as "Napoleon", was the most popular cannon used during the American Civil War. It supposed almost the 40% of the ordnance of the artillery and it was one of the most important pieces of that conflict. The "Napoleon" cannon was widely admired for its safety, reliability and efficiency, especially in the short range.

The American Civil War was a very significant event in the history of the United States of America, which took place between 1861 and 1865. The two sides faced were by one hand, the forces of the Northern states (La Union) against the newly Formed Confederate States of America, integrated by eleven states of the South, by the other hand that proclaimed its independence.

Four years after the start of the war, Confederate General Robert E. Lee, with an army dwindled by casualties and desertions, decided that it was better to surrender. On April 9, 1865, a meeting was arranged with General Ulysses S. Grant to sign the document of surrendering to the Confederate Army. President Andrew Jackson declared the official end of the war on August 20, 1866.

Remember the battle of Gettysburg with the DENIX reproduction of the most important cannon of the American Civil War!