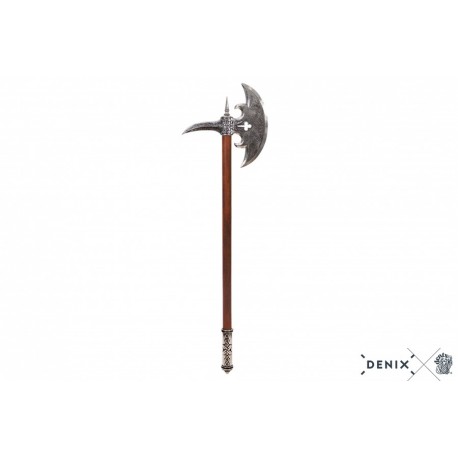 Reproduction of an axe, made of metal and wood.

The axe known as Raven Peak, used by the cavalry in southern Germany, was a short weapon between 50 and 80 cm, which used to have a wooden handle. Its head was formed by a long curved beak, which gave it its name, and an axe blade, lighter than normal.

The combat axes of the sixteenth century were the military version of the traditional lumberjack axes, but lighter, in order to wield them more loosely and with a sharper blade for greater effectiveness. It was one of the most powerful and effective cutting weapons of that period, and it was used mainly by nailing it to the shield, thus generating an added weight to the enemy combatants, who were forced to release it while being exposed.

At that time, the appearance of plaque armors, led to the specialization of axes, which begin to have a peak on the opposite side of the blade, as well as a vertical blade at its top. This is because the penetration was a determining factor when transferring the armor.

Relive the Middle Ages, a period of battles and conquests, with the reproduction of this German fighting axe!